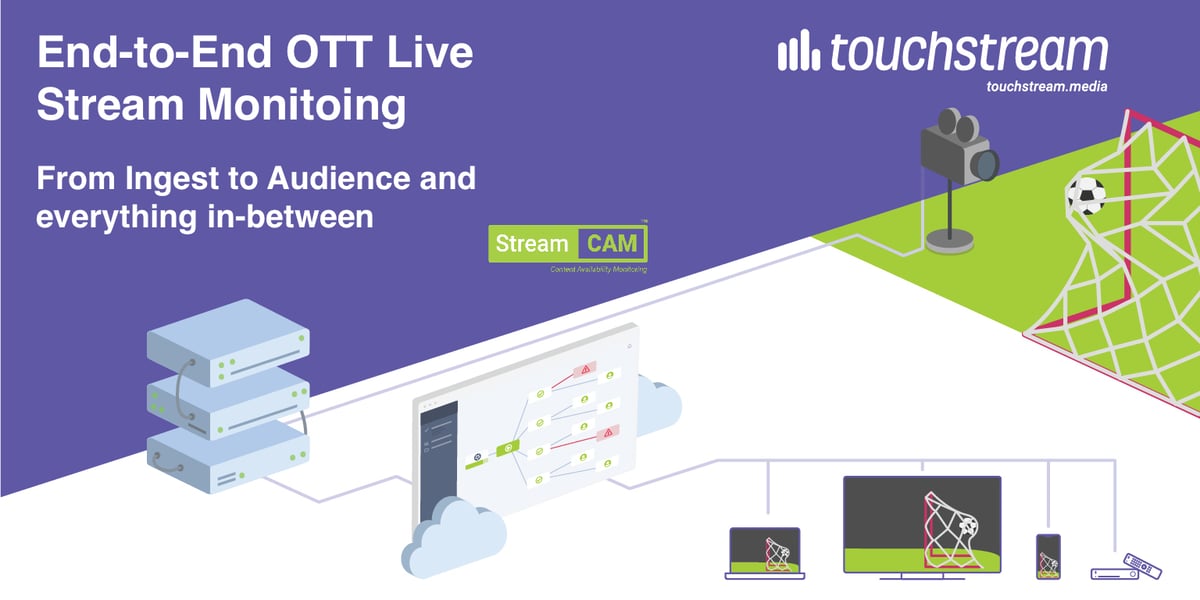 If you are participating in the streaming video explosion across the globe, perhaps as a content owner or a video service provider/OTT platform, then you understand the need for ensuring video quality and availability. Viewers have high expectations for online video. They want the experience to mimic what they are used to with broadcast television—consistent, high quality. And that’s where the problems begin.

Traditional broadcasters have a bevy of technology at their fingertips to trace quality issues down to the set-top box. They can guarantee a high quality-of-experience because most of the broadcast transmission is on a closed network, completely controlled by the broadcaster.

Unfortunately, that doesn’t really exist in the streaming world. OTT services often leverage multiple networks, from CDN to ISP to the Internet, and players across a variety of devices. It can be a nightmare to trace an issue to its root cause in time to do something about it. This challenge is exacerbated by the use of distributed, software-based components as part of an OTT workflow.

Many OTT providers, including incumbent broadcasters who are dabbling in or have fully embraced over-the-top delivery, are adopting cloud-based process. They are moving a variety of functions that were typically hardware-based, such as encoding, security, and ad insertion, into the cloud.

When combined with distributed delivery services, like CDNs, these cloud-based OTT workflows represent a complex morass of services that all need to be monitored.

A New Environment Requires a New Approach to Monitoring

Traditional video broadcasters have long prided themselves on the high level of Quality of Service (QoS) they can provide their viewers, but as viewers have increasingly adopted OTT services to stream content, broadcasters have tried to shoehorn their existing hardware-based monitoring infrastructure into their OTT workflows with limited success.

While moving OTT workflow components to the cloud can mean abandoning operational insight that enables broadcasters and video providers to provide the highest level of service to their viewers, replicating the kind of end-to-end workflow monitoring that assures a high QoS can be difficult for cloud-based workflows. Doing so requires a new way of thinking about end-to-end monitoring so that issues can be proactively addressed before they result in viewer churn. As such, existing fixed monitoring solutions are no longer relevant. Focused on analyzing data of in-network components such as hardware-based encoders, they can’t extend to the cloud, enabling, in many cases, only a partial picture of the OTT workflow.

Without visibility to the entire delivery chain, it becomes nearly impossible to be proactive about resolving viewer issues. And it doesn’t do any good to understand a problem with a video stream, like a malfunctioning bitrate, five minutes after it’s happened. By that time, users have already abandoned streams, complained via social media, and perhaps even terminated their subscriptions. To address cloud-based OTT workflow, the monitoring has to be cloud-based as well.

When we launched StreamCAM, little did we realize that we were changing the way video streaming was monitored. Most OTT providers were employing player-based solutions like Conviva and Nice People at Work, in conjunction with hardware-based components to monitor in-network systems, to inform them about the viewer experience and related issues. And although client-side data is critical, many OTT providers were missing pieces of the picture—how encoders and CDNs were performing, what bitrates, as part of an ABR package, weren’t even available, etc.

To address the missing information, often for cloud-based components, we built a platform of cloud-based agents that could watch over streams 24/7/365. Ultimately, this enables OTT providers to be proactive in their monitoring and approach to issue resolution. In many cases, issues that are reported by the player can be resolved by addressing delivery-related problems before they manifest in the viewer experience.

StreamCAM was really the first incarnation of our monitoring strategy. We recognized that the agents looking at stream health, like availability of bitrates, could be applied to other OTT workflow components in order to provide video distributors a complete picture of all their service pieces.

As such, we announced the availability of StreamE2E earlier this year, at the BVE event in London. Leveraging that cloud-based agent platform we pioneered for StreamCAM, we enabled video distributors and OTT service providers the ability to monitor their entire cloud-based workflow.

Our first attempt was a notable effort to provide monitoring clarity to all the disparate pieces of a cloud-based video workflow. This enabled those providers to operationalize a proactive approach to streaming issue resolution. We knew that we could make it better, especially considering that many providers were gathering data from a variety of systems. We believed that what they needed was a way to visualize the health of their OTT workflow with all the data they had.

Workflow Monitoring Gets Even Better with StreamE2E 2.0

The second iteration of StreamE2E, announced at IBC 2018, was exactly that. We worked closely with StreamE2E customers through the year on several product fronts.

First, we knew that visualization needed to improve. It needed to be easier to see the health of the entire OTT workflow, to identify which components were causing problems, and be able to quickly drill into them for resolution.

Second, we understood that the number of OTT components was growing. New vendors were entering the market, established vendors were launching new services, etc. So, we expanded the agent platform to encompass more third-party data sources.

And finally, we tooled the entire StreamE2E offering to improve root-cause diagnosis, making it easier and faster for users to resolve issues.

This new version of StreamE2E provides a much better workflow visualization that also includes external data sources. Like the previous version, video distributors get a clear picture of their entire cloud-based OTT workflow enabling them to proactively track down problems (such as when a specific bitrate isn’t available) and resolve them before they become customer-service issues.

In this new version, all supported workflow components are displayed, allowing the user to drill into specific elements of the delivery flow to diagnose problems.

Obviously, one of the biggest requests we get from customers regarding StreamE2E is expanding the number of supported components that can be included in the monitoring system.

Although this is an ongoing effort, we are happy to announce that we have launched a number of partnerships with video workflow service providers that enable data from their systems to be consumed and reported on by our cloud-based agent platform. These components include:

One of the benefits of incorporating third-party data into the SteamE2E stream monitoring system is to improve root-cause diagnosis. When looking at multiple dashboards or analyzing data from multiple tools (in a variety of formats), it can become difficult to trace an issue through the entire workflow. StreamE2E has solved that problem.

With StreamE2E, multiple partners are sharing live data with our cloud-agent platform:

By doing so, StreamE2E can incorporate unique identifiers (like Session ID) into the workflow visualization, thereby enabling users to trace a single piece of data through the entire delivery chain. This functionality has been developed over the past two years through a successful live-data sharing approach developed with Akamai (a leading CDN).

Throughout that engagement with Akamai, we were able to consistently demonstrate that incorporating live data from third-party providers significantly reduces issue diagnosis time and enables quicker resolution to resolve quality-of-experience problems before they significantly impact subscriber churn.

The Future of Stream Monitoring is Now

With this expanded version of StreamE2E, OTT service providers and video distributors can now have a much clearer picture of their entire workflow including data from a variety of third-party components. This will enable them to better visualize delivery performance and more quickly determine the root cause of issues interrupting the viewer experience.

StreamE2E is powered by a scalable cloud-based agent platform, so OTT providers can become more proactive. The agents collecting data don’t sleep. They don’t need to be turned on. They work tirelessly to provide 24/7/365 monitoring of stream health and delivery performance so that problems can be resolved way before they become churn-inducing events.

If you would like to know more, schedule a demo now.

Related Articles
Create a Loyal User Base With OTT End-to-End Problem Management
A DVR For Data: StreamE2E Incident Playback
Survey: Live Streaming QoE is Good Enough for Explosive Growth; but to Compete and Win, You’ll Need More Data, Delivered Faster
Want to improve your QoS?
Start monitoring with Touchstream and find the root cause of streaming errors in minutes, verify your CDNs independently, and more.